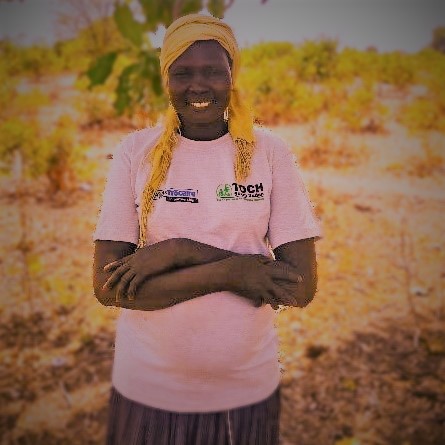 In bid to strengthen the social justice to reduce the social injustices perpetrated against women in the village traditional courts which is traditionally male dominated,  TOCH is implementing Communities Care Program and Women Empowerment Project with support from  Cafod&Trocaire in partnership(CTP)  in Warrap state, among other key activities is advocating for equal representation of women in the male -dominated traditional village courts

Deborah Akuacdit is  member of Women Peace Network in Manyang, Manyang is one of five locations in which TOCH is implementing the Communities Care program  and Women Empowerment Project ,In October 2019, Deborah was introduced to Bouiyar county bench court as a Representative of Women in the highly case- congested court

For Deborah,this was more than just an opportunity to present a new face to the court of men but she is like a vessel of restoration of justice and fair hearing to the many women who had  lost hope in the male judicial justice

i have been in over 200 cases in the court but among these cases, i have presided and ruled  over 16 cases  as a final judge and my decisions were followed and implemented,the judgement was based on fair hearing and justice was served in each case.I have revived 4 cases of women whose cases were judged biasly and they were victimized,i nullified the decisions that were imposed on them in the earlier biased judgement and gave them justice under my ruling

One woman with courage is a revolution, Deborah Akuacdit was promoted in the court as a second judge for women and girls affairs in Manyang

to be a focal point for women and girls affairs was  never my expectation,i was excited!when all cases involving women and girls are referred to my office day in and out i feel am representing them well,the chance given to me to counsel the women and girls is the greatest experience of my life

The popularity I have gained among women of this village and nearby is amazing am known everywhere as a chief!

i recommend TOCH to continue advocating for women representation in traditional courts so that challenges of injustices that women and girls long experienced can be eliminated ,this is our time to be empowered and also to participate in decisions that affect us