As South Sudan celebrates International Women Day 8th March, 2019, TOCH South Sudan would like to share a story of one of her staffs Ms.Abak Bak Makuac who believes education is a tool to empower women and girls. Below is her real story!

When Abak started her school at early age, she had two brothers. Her mother first denied her education and took decision that only her boys would attend school but Abak herself insisted and refused to eat food for two days because of being denied education by her own mother. After that the mother saw the need as a serious issue within the family which needs an attention. She called Abak and informed her that she would be allowed to join school. This was a breakthrough and new beginning after she receives positive feedback from her mother. Abak continues with her primary education until she sat for her primary leaving education in 2007 and she continue to complete her secondary school in 2011 though the syllabus were  in Arabic language but she continue with Art subjects as she did not have any option to pursue.

In 2014, she worked with women union as a Secretary for information. During that time, she was nominated to attend a workshop organized by TOCH on gender, conflict and security. Abak participated in that workshop and because of her activeness, influence, hard work, participation, and leadership, she was given an offer as a community engagement officer in 2017 under community care programme, catalyse community-led action to reduce tolerance of sexual violence and to implement comprehensive prevention measures through transforming harmful beliefs and norms that foster sexual violence. This was her first job working with organisation and considering a challenge of the language since English become the means of reporting.

Though she is face with such challenges, she continues to discharge her roles effectively and is now learning from her colleagues. TOCH was also able to connect her with United Humanity, an organisation which works with young people through retreats, exchange visits including individual reflections on the changes an individual needed for her community and the country. Abak so far travel to Uganda, Rwanda, South Africa and Nepal for exchange visit to interact with other young people from South Sudan. 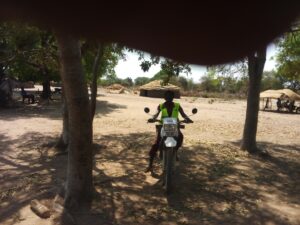 When Abak Bak joined TOCH she didn’t know how to ride a motorbike but right now she can ride to the field alone using motorbike.

Her vision is to make influence on girls education and women empowerment in south Sudan. ladies should not sit down to wait for empowerment they have to start on their own and later on get public support she added that ladies should engage themselves with successful people so that they  get inspired and also becomes successful as well. As saying goes that try to fall than never women should try to work harder than ignoring work likewise what men can do women can also do it.